Look what I found growing in the garden. Scrabbling about in a pile of old pots while potting on tomato plants, a real printer's pie of miscellaneous type I picked up over a decade ago. Left in the garden five years ago when we moved here and promptly forgotten. Poor old bits, they were covered in rust (so not lead, but steel?) 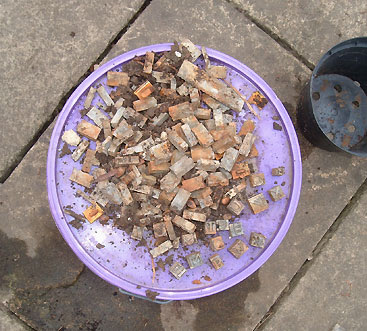 I felt as guilty as if I'd left a kitten in the rain, especially as I had bought some bits and bobs of type from eBay when I was feeling a bit flush. I seem to have an almost complete lovely font, the one near the bottom of the picture. Only one of each, so limited printing use. I don't know what font it is, any type geeks out there? (edit - thanks Sue, it was indeed Windsor Antique D Bold - Font Head of the month award to you!) (further edit - No it wasn't! There has been some last minute contention and further investigation is needed...) 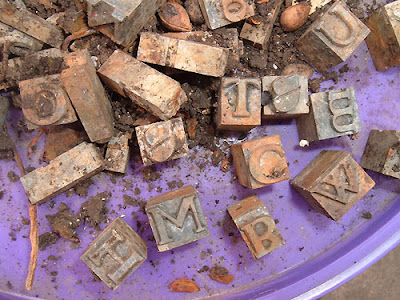 Sue W, (who wonderfully has dusted off her wood engraving equipment and started printing again too) found a page about removing rust with tea. Well the least I could do was give them a cuppa after five years weathering it in the garden, so they went into a bowl of Co-op's finest and steeped for three days. It actually almost worked, and every time I changed it more debris floated off - amazing. But they needed some more in depth cleaning, so I've been going at them with wire wool, old toothbrush, white spirit and an awl, to prise out the crud. 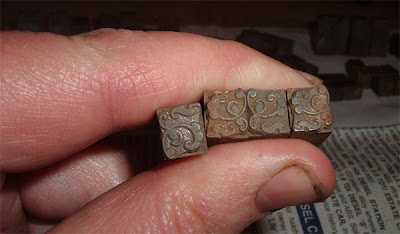 A gorgeous decorative font, perfect for borders. S'cuse the grubby nails, I am a bit unpresentable in the hand department with one thing and another. 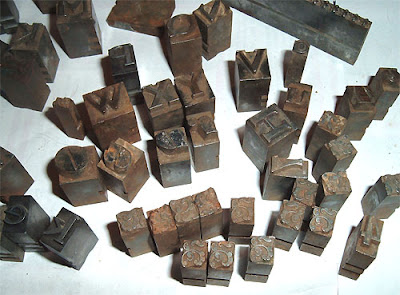 This little lot took about two hours to scrub up. I can't get the last rust stains off, if anyone knows a UK product which does this effectively, I'd be glad to know. 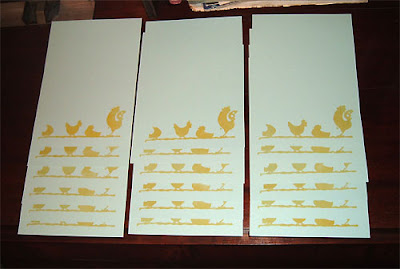 Finally got my mojo back with the printing after the trials and errors of the other day. This lot worked really well, using a normal card stock - the linen effect of the pink sets was very pretty but not well suited to taking ink. My little lino block is getting quite flattened and cracked in places, I might get away with another batch, before it goes completely wonky. I've decided to turn them into little cards, for Etsy, (resurrected project number three hundred and seventy three). I'm starting to get the hang of bouncing from one thing to another, something I couldn't have done a few years ago. And it's such fun - which is how it should be.

Hi pg - thanks for your kind comment on my very longwinded blog earlier!
I, too, love fonts (although I don't know an incredible amount about them. I thought initially you meant a font from a church, and I thought, she'll going to have one helluva job putting that back together again, until I looked closer.) It's a lovely one - a bit of a celtic touch - but I'm afraid I don't recognise it. My current favourite is Lucida Bright - and I also have a printing tray (empty) marked for Gill Sans, which is also a trusty friend.
Your printing looks lovely, by the way. Do you sell it locally? (I'm not very far from the Cotswolds.)

What a wonderful find!!! Some of my favorite cleansers are the simple ones, like baking soda... or vinegar...baking soda AND vinegar. If nothing else, that one's fun to play with. Isn't there something called "ruby" that polishes steel? Or redding? A jeweler would know what cleans different metals. This is fun -- I feel I've been out in the garden, peering over your shoulder.

Good grief it is late but I am so impressed.

Jewelers rouge I think.. or just whiting if you can still get it but I think tooth brusha dn elbow grease is the only answer. God all I find in my gardn is crud!!

They've come up really well! The font looks a bit like Windsor Bold, but I don't have it on my computer to check it out. I used to have an old Letraset catalogue, but it's been packed away or chucked. You should be able to find out on the web. The tail of the Q is often a give-away in look-alike fonts.
Well done!

I would suggest Bar Keepers Friend for getting the rust off, but I don't know if it's sold in the UK.

I do know that soaking in methylated spirits can help with rust removal. Also scrubbing with kerosene. What a find. I can see some beautiful cards coming up.

What lovely pieces, Gretel, well worth all the hard work.

As regards getting rid of the rust, there are products designed to eat the rust growing on car bodywork - can't remember the names of any at the moment - but they're very effective. A trip to Halfords might be a good move!

I am a cancer born the year before you. Didn't get any artistic traits so maybe I was born the wrong year. Do love to be surrounded by books though very comforting.
I love your illustrations I have noticed your Avatar before and never thought about where you got it from. So many talented people on this site I am in awe.

How excting, and funny, finding your own treasure!!
P.x

I think you seem to have tried most of the regular cleaning metods, but leaving it in Coke cola for 24hrs is pretty good.

treasure in the garden! All I ever find are weeds and once I found an old comb.

they look rather lovely with the rust, actually.

but another thing poss. worth trying - which I was recommended for getting rust off some antique Victorian cut steel jewellry - was to use size (as in decorator's size) with a copper bristle suede (shoe cleaning) brush.

WOW what a discovery...all I ever find when scrabbling around in my back yard is cat poo......

Another cleaning suggestion is to soak in brown sauce....

They sell bar keepers friend in the DIY shop in the village if you need me to pick some up for you...

Judging from the suggestions, you'll be brewing up concoctions, stirring them in a flask over a Bunsen burner and looking for all the world like Merlin mixing magic potions.
Beware of leaving anything in Coke for too long...in the classroom and just for fun, I'd have the kids drop various things in Coke and some things dissolved clean away.
Merlin aside, you must have felt like a pirate digging treasure...what fun in the garden.

Rust stains fabric permanently, so it might be fun to try and 'rust - print' words/phrases onto cushions etc.

Oh what a good idea - thank you for that, Janet Claire!