DISCLAIMER. The following post is a personal recollection and is not intended to be a definitive guide to edible mushrooms. Get a decent book instead.
It seems to have been a great year for toadstools and fungi. I've been an amateur mycologist since I was small. I was about 8 years old when I was bought - at my own precocious request - my first identification book; the Octopus guide by Dr Miro Svrcek, which still comes out with me now. A couple of years later, I was allowed to go exploring the countryside on my own. (Thanks mum, that must have been so hard for you to let me go, and I really appreciate it now). Kitted up with my green khaki rucksack, some sweets, sandwiches, thermos, compass, and my Mushrooom book, I tramped the lanes and woods of the Dawlish countryside in search of edible fungi and adventure. So long as I could show my anxious mother that I had identified whatever it was correctly, I was allowed to eat it, cooked by myself in a frying pan with a little butter. I made myself very ill once with a dodgy puffball, not really believing that they were inedible if the inner flesh was not completely white...but that was the only time. Nowadays I'm just as happy collecting photos, (although finding a good crop of edibles is always a bonus). We've found some real stunners this year, like this beautiful cup fungus, seen from the side and from above, with its pool of rainwater, looking for all the world like a fairy pool.

And of course, fly agarics are always lovely to look at...

Sadly we missed the puffball season. Instead, the woodland floor threw up sprawling colonies of Earth Balls, alien looking and hard to the touch when young. 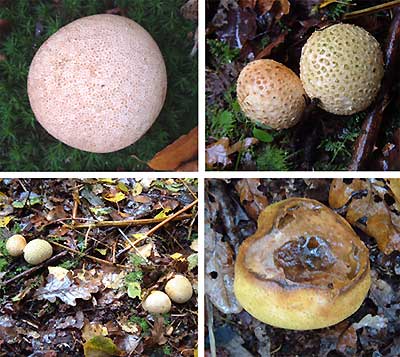 In the coniferous part of the woods, where the towering pine trees make a dense, dark cover, there was an abundant crop of Stink Horns, whose Latin name is aptly 'Phallus Impudicus'. These start off as 'eggs' - in fact, in the Black Forest of Germany, they are called 'Witches' Eggs' or 'Devils Eggs' and are eaten when unexpanded. The mucus layer is slipped off and the ball inside is reputed to have a 'pleasant earthy taste'. So says my old Shell Country Book...but I think I'll stick with just taking pictures...from egg to old age. 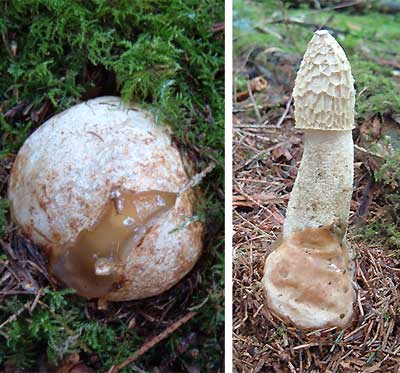 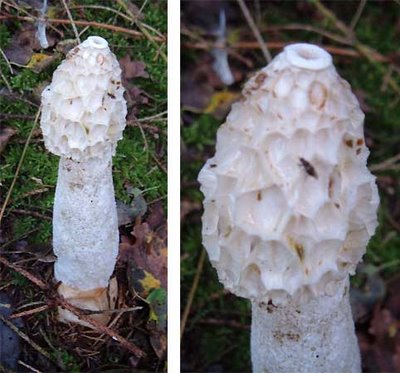 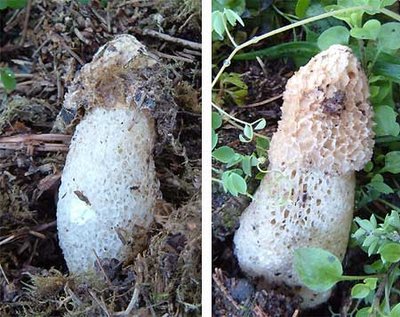 The Shell book also says that; "if you take an 'egg' home and leave it on a damp cloth, a stinkhorn will sooner or later emerge, almost suddenly. But it will not make you popular".
Now this pale and creepy chap is a new one to me. It's the False Death Cap. It's stumpier than a real Death Cap and has a velvety sheath splitting over a delicate lemon underskin. The real tester is the smell, which is of fresh raw potato. Actual Death Caps should Never Be Handled. In fact, I used a leaf to move this one, as I would do with any toadstool I was unsure of or believed to be poisonous. 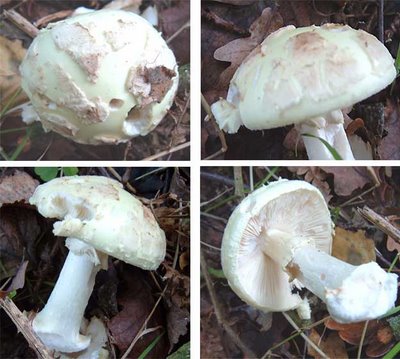 This is a particularly fine type of bracket fungus, and its exquisite lacing of gills, well worth crawling underneath to see. 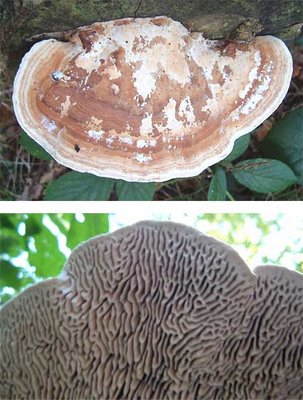 This tough character is the Birch Polypore - also known as the 'Razor Strop', as it used to be dried and used for sharpening razors. 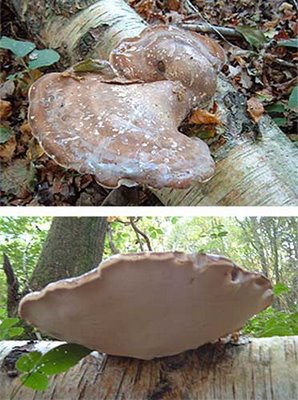 Finally...an example of how you must be so careful when identifying even the seemingly innocuous. It's simple enough to identify a Parasol mushroom, (Lepiota Procera) although there is also the Stinking Parasol, (Lepiota Cristata) which has a smell 'like tar', looks a bit stouter than its tall elegant cousin and is definitely to be avoided. I've never found one of these, but I always have a cautious sniff of whatever we're picking, as smell can be a good pointer as to what is what. So - the common Parasol, as gathered by Andy... 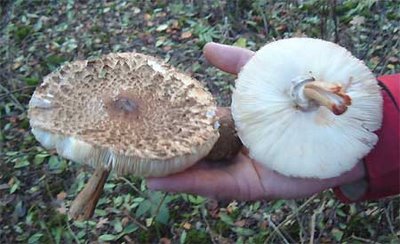 ...and these plainer fellows, picked by me yesterday. They look very much like Parasols, but not the shaggy or common ones. In fact, they look a little like the photos of the stinking variety. 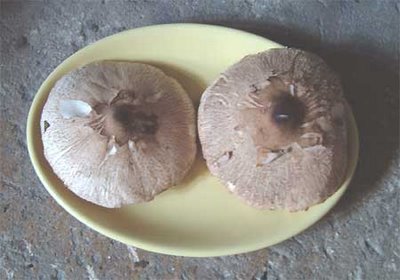 This is when I sit down with several books and the internet and do lots of cross referencing. The smell is a nice mushroom aroma, not at all tarry, and I know we've eaten this kind before. But I want to be certain. At last I discover that it is lesser known type, 'Lepiota Excoriata' and it is edible. Good. Because I've waffled on about fungus for a long time now, and it is way past the breakfast hour. Fried, I think, in a little butter. Just as I've always done.
Posted by Gretel at 10:47

The last photo made me laugh! (sorry to bring down the tone of your blog)
P.xx

What interesting fungus you have where you live. Nothing like that here.

These photos are so amazing! Thank you for sharing! I have very much enjoyed my visit to your blog!
Have a lovely day.
:-)

Now I've got a powerful yen for mushrooms, slowly sauteed, maybe with a tetch of garlic... mmmm.

Mushroom hunts have long been a favourite autumn activity for us. When the children were younger we would collect some to make spore prints. Your photographs are wonderful and you are so knowledgeable I would never dare risk eating any. Oh and I can still recall the smell of our first stickhorn - aptly named.

you amaze me again Gretel - with your prowess for all things natural and in the wild. I have never been a mushroom person but that doesn't stop me from appreciating and watching as you learn, resource, read and explore until the outcome is a meal I can tell you enjoy!
XOXO

This was a fascinating read...I'd read a mushroom book all the way through if it was written like this post! When the children were young, we'd head out in the fall for shaggy manes and rush home to fill the pan with butter and have a feast. We'd also hunt down morrells and puffballs. One time a neighbour drove up in his old pick-up truck and handed us a puffball larger than a soccer ball and we were eating it for days!

Mushroom hunting (and eating!) is one of my favorite activities. We've had a lousy year for them thus far - but with all the rain coming now, maybe they will emerge?

Mushrooms are such a mystery to me. My mother got sick on them once when she was young and passed her reluctance on to me.

I certainly can appreciate your photography. You make them look like little castles.

Absolutely fantastic photographs - I feel like I've been on a nature walk with you!! Thank you, that was lovely; I could just eat some fried mushrooms on toast *slurp*!!

We've always wanted to learn more about mushrooms - I love the fall when they all start popping up. One day.... At least today you gave us a real treat. Thanks so much.

Very interesting post! The photos are great, but I share some of the others' reluctance to dig in and try them. I'm a wuss that way. They are such interesting specimens aren't they?

I have those red and white spotted ones sometimes in my yard - they spring up overnight & I am convinced they are from a faery ring.
by the way - there should be a little faery package being delivered very soon! I sure hope the faeries haven't waylaid it this time xo

Nothing like finding your own wild mushrooms and cooking them up...in Minnesota we had a lot of morrels and boletes, puff balls, oh and chanterelles- yum, yum, yum!!

My daughter took some similar photographs on our holiday in France. It was great to see a 17 year old so absorbed in nature! There she was, lying amongst the leaves lookig up at huge fungi!

Woweeeee!!
You live in a mushroom treasure land Pg!!

Thanks for getting my mouth watering! We're at the beginning of winter here and all there is on the ground is a nice layer of humus topped by snow. And more snow.

---By the way, I just noticed I'm linked from your blog! I've been visiting forever...how did I not notice that? Thank you! (by the way, scrolling down, those Pooh cards really do have your fingerprints all over them. Congrats!)

Wow! I have never seen such an assortment of mushrooms. And some really interesting looking ones too. Glad you had a nice time away :)

How wonderful I just adore your photo's of toadstools and fungi.

We have the red ones with the white spots growing on our land. So magical, in fact untill I moved to our small holding I truly beleived they were fictional, and just illustrations in fairy stories.