All kinds of everything

It's quiet...summer is dribbling into autumn and there is a touch of melancholy to the mornings. Cricket at the moment involves wearing enough warm clothes not to get exposure, while watching one's beloved thwack a few balls and take a spectacular catch on the boundary. On Saturday, thunderstorms swept West Oxfordshire, raining off dozens of village matches. But where we were, the only downpour obligingly occurred during in the tea break, (time enough to scrounge a hot cup of tea and some wickedly gooey chocolate cake) and we watched the clouds rumble over Chadlington, to assorted cries of 'go over Charlb'ry way!' Which we later learned they obligingly did. Oh yes, and we won. 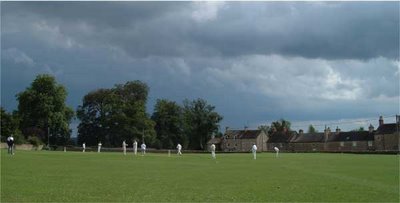 Sometimes our little cat Mouse sits and stares. And stares. And stares. She may be working out algebraic formulae, but I don't think so. She is a simple soul, and even simpler since wandering out in front of a car. Never been quite 'all there'. Something vacant in her eyes. So when I saw her gazing earnestly into the drinking bowl, I thought she was having one of her 'moments'; perhaps trying to work out who the strange staring cat in the water was. But she was actually watching this tiny chap floundering about. He was so tired, he was quite content to rest on my finger for his portrait. 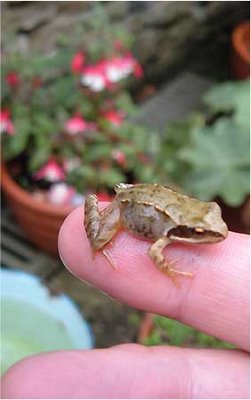 And then there was this...another SOSF delivery from my lovely and talented friend across the sea. Quite undeserved and unexpected. My favourite nougat 'pie' and brittle honey seedy nutty snacks and natural chewing gum and - and - herbs and spices, and a gorgeous card. Oh yes, did I mention coffee? There was Greek coffee too...and now I know how to make it, as she cunningly posted the recipe for it here. 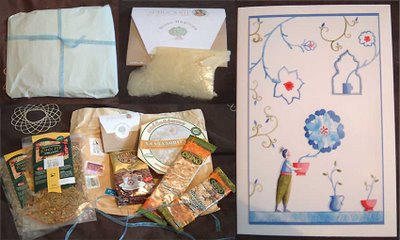 There has been an enthusiastic response to the call-up for SOSF participants. Remember, the closing date is 21st of September. So there's still time for all fairies - everywhere.
Posted by Gretel at 20:48

Lovely parcel from a lovely friend! ;)
Love the little frog too - glad you rescued the little fella!

What a lovely scrumptious parcel. I always find cats are fascinated by frogs and toads, dear little Pixie used to play with our garden toad, she would attack it and the toad would jump high in the air and land, and she could never spot it because it blended so well into the foliage, I am sure she used to sniff it out, then she would paw it again, and the whole sequence would restart. She never killed the toad but they did spend many an hour with this game.

Oh sweetest little frog! I love the way cats have the patience to stare and stare and stare. Our fluffy black one used to spend all day every day staring into a small hole by the front gate. We never knew why. It was like he was on sentry duty and he rarely left his post! It was only when we moved house that he stopped. I wonder if he ever thinks of his hole in the wall?

mmmmm! that greek coffee sounds heavenly.. i am going to have to try it out...we have 3frogs in our little pond, i love watching them sun themselves, they are much bigger than your little guy, but i have seen a few tiny ones in our tall grasses..they bring such a smile to my face...
take care sister faerie~
k

Oh, that frog is just too cute - I can't believe he was so willing to sit and rest on your finger - he's tiny! Isn't it lovely to receive parcels from afar - such a great way to start the day.