I've been drifting for a couple of weeks...done not-a-lot, especially not artwork. Needed a break. Got a bit bored by the end. So, the invitation to attend Templar's summer party seemed like an ideal way to round off July. Held in the lush, cushioned landscape of Surrey, it was no ordinary bash; no hot offices, warm white wine and sweating canapes.

This was more like an informal wedding reception, with camping. It took me two buses, two trains, another bus and, after a much needed pint of London Pride at the village pub, nearly 2 miles walking with a large rucksack to get to the venue. It was quite refreshing to see different countryside; as I rarely leave our patch of Oxfordshire, I get pathetically excited at seeing different field layouts, and stonework in cottages. More red brick and darker stone. Very pretty. 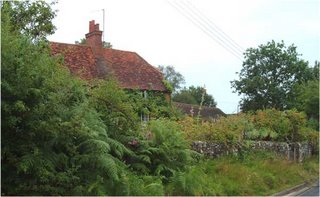 Just when I was thinking I was on a long, winding road to nowhere, I found the promised balloons - red and black, as the party theme was pirates, celebrating the launch of Piratology. 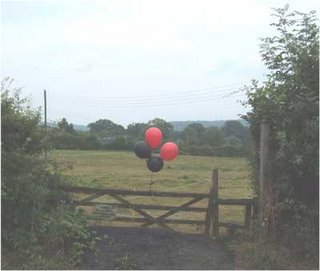 At last...at last...after another 20 minutes I reached the site. Someone kindly took me under their wing and helped me put my tent up, (although I still had to ring Andy at work for a bit of help with where the poles should go...). It wasn't quite right, but we agreed it would do for one night. Then it was off for mingling and hopefully beer. Everyone was so friendly - I hovered on the edges at first, feeling like a spare part, but the MD herself bounded up to me, introduced herself and led me to where a whole keg of London Pride was about to be tapped...after that, it was fine. There was a country band playing, the ubiquitous bouncy castle, hog roast, bowls of salads, a 'publishers amount' of alcohol and a warm, friendly atmosphere, with lots of children and dogs tumbling about having fun.

Several people from the company knew my name, and to my delight, two of the other three 'Princess's Handbook' illustrators were there - Georgina Mcbain and Sophie Alsop. We got together with our lovely (and incredibly patient) art director, and the writer, Stella Gurney and compared notes on the project. We were all thrilled to hear that although the UK version is not due out for a couple of months, it has been taken on in the US by the mighty Candlewick Press, which is very promising for sales. 'The Numptys' came up in conversation...sent to them in April and apparently vanished into the ether. Promises were made to find and review them. As well, to my mixed terror and wonder, I was introduced to one of my illustration heroes, Helen Ward, who is, in my opinion, one of the UK's most skilled picture book artists. I went kind of quiet...and didn't really know what to say. As you do. Or rather, don't. 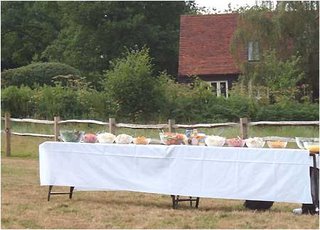 With a few more beers, some foot tapping to the nightime band performing barn-storming covers, it was soon way past my bedtime. I accepted someone's offer to walk back to the camping field, thinking I was headed for bed and blissful sleep, when I saw, in the distance, a large campfire. The party beyond the party. Where I got to talk sensibly to Helen Ward, about this and that, and got another promise from someone else within the company to find the Numptys. In fact, with one thing and another, I didn't get to bed till the sun was pushing the night sky up. I did very well on four hours sleep, scrounged a lift to the train station and repeated my journey backwards. Met Andy with bike at the new cricket field, and we watched our side Eynsham win a legendary Airey Cup game against Tetsworth - now we go into the final!
Posted by Gretel at 13:29

It sounds like you had a blissful time; let’s hope when you hear back about the ‘The Numptys’ it’s good news.

That sounds great Gretel, how wonderful to be asked to that kind of party for work! I hope you keep up with all your contacts (nag nag!!)and that the Numptys get taken on. P.x

It all sounds lovely Gretel. I remember going to parties when we lived in Kent where the night would end around a bonfire telling stories and talking nonsense until the sun came up. Great fun ;-)

Wow- I've never heard of a party like that, it sounded brilliant. And Helen Ward is one of my heros too. :o)

Sounds like an incredible party Gretel!! :)
It's a treat to read your adventures! You always have a lovely way with words!

What a great idea for a party! Lucky you! Nice to put face to names too I should think.
I hope Numpties surface and do well.

wow...lucky you youve got some faces to go with names, sounds like a great party.

It looks perfect. What a fun idea!! Glad you finally made it after all your travels!