The owl pellet we found recently yielded the remains of what were probably a rat. Andy's Mum (who's good at these things), showed us how to wash the pellet in warm water to loosen it and tease out the boney treasures. (For a more scientific account of pellets, go here).

So what I had (unrealistically) thought were large teeth were actually vertebrae. There were bits of straw in there too, and with a farm near the find site, it was probably a barn owl. Sadly, there has a been a dead owl at this farm for several weeks. (No one seems bothered about moving it, although today we saw that it has been slung in a corner now, and moved off the shelf where it had been resting...) A while back, before it got too grotty, I took some photos of it for reference. I was amazed at how light it was, and the softness its feathers. 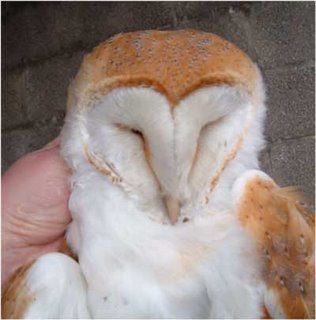 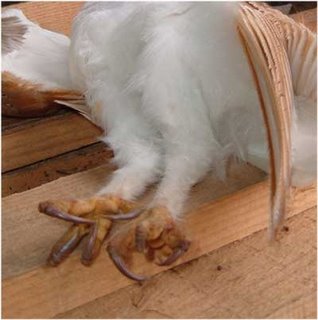 What a terrifying monster this must be to its prey, gliding silently through the velvet night, meathook talons ready to stab through soft, warm little bodies. There is nothing gentle about the barn owl - except it's feathers. A superbly designed killing machine and beautiful with it.

The owl from the book I am working on is an old softy though. He probably eats lentil soup and oatcakes. Nothing lethal about his claws... 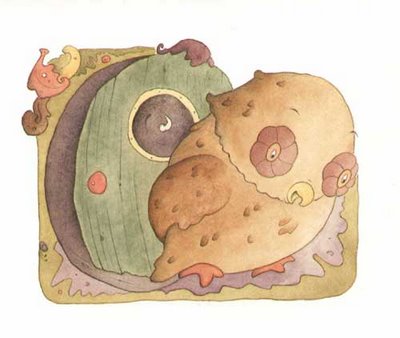 On a less salubrious note, while we were out for our morning walk, we came across a dead crow...

As Andy nudged it with his foot, the head squirmed. It was like that moment from 'Carrie' , when the hand suddenly appears from the grave. Morbidly fascinated, we glimpsed shiny fat black bodies wriggling about in a head cavity, causing the skin to writhe and squirm. They soon vanished iinto the refuge of the rotting skull, and all was still again. Despite poking it with a stick, turning it over and shaking it, no more insect life appeared. We are the Hopeless Naturalists, and we couldn't decide whether it was a spider or carrion beetles. It was a delicously gruesome moment though!

Flippin'eck Gretel! I'm meant to be the morbid one round'ere!! Both birds are beautiful, but the owl is really stunning, would have been better if he was flittin around the place though.

wow- what a stunningly beautiful barn owl, and wrigglesome crow. Although I'm sad when I fin dead animals I'm also incredibly curious like you and love to have a good look to see how they work.

Hope you have a nice restful bank holiday,

Sadly the only time we get a chance to really see this kind of 'exciting' nature is when it's dead - I think barn owls must have had a good year round here though, happily there are some flitting about, especially at crack of dawn (Andy sees them on way to work, I am in bed zzing1)

thanks for the return visit.
Who'd have thought a dead owl would be still so beautiful?

Yes, sorry to hear about your owl - but I've seen lots of them flitting round rural Oxfordshire, too. It's their plumage, and the patterns on them, which I find particularly fascinating.

Your blog is looking good, you've had a nip and tuck too I see :-)

Ha, yes, just a little one...still getting my head round html...

Thanks for sharing those pics pg, the owl is stunning, it always amazes me how little owl there actually is under all that plumage ... Sad to see these things dead, but I guess that's nature for you ... ;)
I've seen lots of dead badgers on the roads recently, it's that time of year ... ;)

What a handsome owl. I love owl pellets so fasinating. I found some in a church yard outside bristol a few years ago, while while gathering some work for an illustration project. I took them to the boy I was working for a nanny for. we had such fun and mounted them all on card. He took it in for his cubs and got an extra badge.

Your owl looks really friendly and what an interesting crow. I thought of you at the weekend when I wanted to bring a whole sheeps skull home. I did not have a bag to put it in which was sad.

Ah, what a pity...I would have been tempted to carry the thing home in my arms, scaring the locals...I used to have a rams skull on my doorstep but it got pinched....:(

I think I shall start taking bags out with my when I walk. Just in case.

Bags are a good thing, I had a rucksack but K would not want it in there with his climbing stuff. I could not really manage it and scamble over rocks so I hid it but we went back a different way.

My mum new this taxidermis(?) who said if she found dead things she would like them, but it might be better to leave them to the creepy crawlies.

Joanna, you are a collector after my own heart! I'm glad I'm not the only one who likes to drag dead things home, after minor altercations with walking companion...("WHY can't you put it in your pocket?!")

But you're right, they are the towns and cities of insectdom, and probably best left to dissolve quietly.