My first memory of artworking was drawing endless circles in a jotter. My mother was a great letter writer and in order to keep a restless toddler quiet, she would give me a cheap lined notepad in which I would write my own 'letters'; row after endless row of biro'ed noughts. In the end I had a whole book of them. I can still recall how absorbing I found this activity, and looking up from the floor to see mum writing away at the table. I remembered this today, when I attempted my first outdoors sketch for - a long time. I've gotten far too reliant on the digital camera, and have started taking my trusty Moleskine and a few scribbling instruments out on my wanders. Andy and I had a discussion the other day (another walk) about how artists interpret the landscape. Neither of us have done much real life drawing recently, and I was wondering how one gets over the hurdle of not drawing precisely what is in front of you, (which is what one instinctively does) but instead describing your personal experience of the landscape. Anyone who loves the countryside must feel this and each person has a different vision. My beloved Cotswolds. How do I depict the tanglewoods, the gently rolling fields, winding lanes and wide open horizons, without producing a pretty picture postcard? How far do I allow myself to go with mark making, without going too far into fantasy land? I stand in awe before such artists such a Samuel Palmer, Paul Nash and John Minton who were able to bridge this gap with such depth of feeling, capturing the unique and ancient atmosphere of our small island. There is only one way to find out, and that is to stumble in their footsteps. Here I started with what I thought was going to be a bodged sketch, drawing directly with pen - unusual for me - but I stuck at it, and after 10 minutes had come out with what could be the start of something. And I found myself filling in the foreground with - noughts. Coming full circle from my first drawings. A hurdle gotten over. 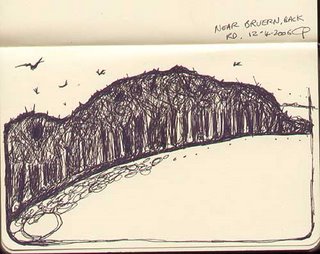 It's a start...I'm looking forward to finishing the book job I"m in the middle of, so that I can get stuck into doing some big landscape lino cuts. Andy's already ahead of me - woodcut, not lino - and the bedroom yesterday was turned into a print studio... 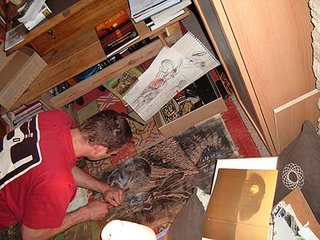 He's had a bit of artistic angst recently (hence no blog) , but - no pain, no gain, and I think this is the best thing he's done since leaving college. He's got his art mojo back. And about time too. Watch this space to see how the Hare turns out. 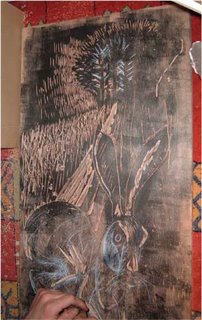 Its a rabbit! (Its probably a hare but its kind of the same thing to me as I like rabbits that are more hare like) Totally fantistic.

Your sketch is great to. I'm so out of practice going out sketching I'm ashamed. All I do is have all my bits of referance its very bad. I like your noughts. I can imagine a night galloping across on his horse and his fair maiden.

Mmmmmm. I love those kinds of sketches-on-location, and am in awe of those that do it so interpretatively. How artsy you two are! :-) It's fun to vicariously see.

I think what struck me most about your sketch was that it did indeed capture a mood, rather than some idealised bucolic scene of natural beauty. It puts me in mind of Neil Gaiman's writing. The clear field of normal life and on the edge, an apparently impenetrable forest -- in which lurk adventures fun and fierce. It seems sinister, and yet beckoning. I would like to walk across that field and step into the woods, and yet I know that if I did, my heart would be pounding and my breathing quick. It would be -- an adventure.

There's something of that in the woodcut Andy is working on too (though admittedly we have only a glimpse. Something about the hare right there, right in front of us, looks so vulnerable -- I almost want to shout Run! Quickly! but perhaps that is because I am feeling protective of small things right now and the amorphous evils which threaten them.

What busy artistic bees you both are! I bet there's barely room to move in your bedroom for all that printing going on. It's looking good Andy :-)

I love the whole 'full circle' thing. Funny how things come back to us. I used to play haberdashery shops in the playground, measuring out fabric, counting buttons. The memory only came back to me recently!

PG, your sketch is is art, I love the dark foreboding feel - was it intentional?
As for Andy's hare, they seemed to give March madness a miss, probably a good idea with the yorkshire weather, but they're everywhere at the moment, crouched in every other field. You can't whack topicality.

Yeah! and its wonderful! Lucky you to have Andy on your journey too!!!

Thank you every one. You are right about the bedroom Dons, there is barely room to squeeze in, but needs must...and I do enjoy picking trails of wood shavings off the carpet ;)I love the idea of you playing haberdashery! Beats Wendy houses.

Ken, thank you - I like picking out the simple shapes of trees, and am a bit obssessed with sillouettes, which always have an edgy feel to them. We have a fair few hares down here, but not leaping out at every corner (good job really, Jeremy Clarkeson would probably run them over).

Funny thing Stuntmother, I prefer the sanctuary (what a lovely word) of the woods...hidden and protected. But I feel safe anywhere in the outdoors - it's towns and the wild animals liveing there which scares me.