Having risen at 6.45 am yesterday to start work, I am just about on top of things. So we took the bus to Burford, my first trip outside the village in two weeks. 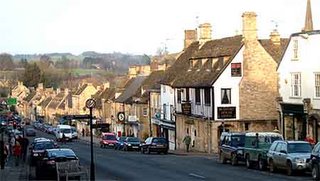 A note on Burford. It is very, very old, unbelievably picturesque, eye wateringly expensive and a tourist honey pot 11 months of the year. January is quiet. I had the whole of my favourite antique shop to myself and after much searching found a couple of old sewing magazines for future 'inspiration'. 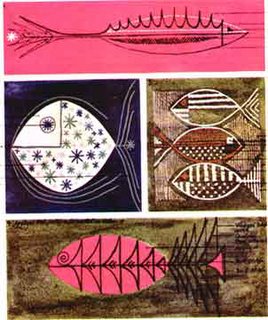 We lunched at the Royal Oak, the best pub in Burford. Situated off the main road in Witney St, it has not been turned into the typical Burford 'pile 'em in, punt 'em out' tourist treadmill with overpriced corporate beer and gastro-pub aspirations. The front bar had a large blazing log fire and we ordered a fine pint of Wadworths 'Henry'. 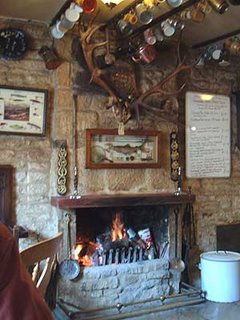 As we waited for our food, the bar became occupied with two of the elderly upper class gentlemen who are typical of this area of the Cotswolds. (Yes, we really are obsessed with class and the weather in England). I instantly nicknamed them 'Mr Toad' and 'Mr Boar' due mainly to physical appearance. Obvious regulars, they commenced gravel toned meanderings about 'flushing out', 'drives', 'over and under' and 'side by side'. They were of course, chatting about the country sport beloved of our Royal Family, Madonna and countless nouveau riche. Shooting. There's a lot of it about here. I present a conversational game pie.

"We shot 85 on the first drive"
"...school fees..."
"It'd be very interesting to know how many birds did get shot - we got 'em to write it down...and then compared it to the bag - the guns all said they'd shot more birds than they actually had!" (chortles)
"But as I say to my keeper...have a sweep of a fiver a gun..."
"...so in two years time - you'll be buying a yacht!"
"It was owned by the Queen Mother and that lot"
"It said in the Daily Telegraph - you do read the daily Telegraph, don't you? " (anxiously). (NB - Daily Telegraph; rather right wing Little England magazine bought by traditionalists, the insecure and well-off elderly).
"Had a chunk of his ear missing where a spaniel took a nip"
And thus they came to the end of their session; time came to tot up the lunch bill, whereupon a slight disagreement almost occurred between these fine, upstanding stalwarts of middle England...
" Was his ploughmans dearer than my soup?"

We were left to enjoy another pint accompanied only by the gentle crackling of the fire. The beams in every room are crammed with jugs - hundreds of jugs...collected by the bar manager. 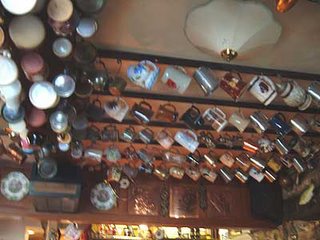 Lunch was very good, if somewhat conservative with the portions, for the prices asked...I don't think we'll be eating there again. We wandered out to the main High Street for window shopping. In a rash mood I entered the upmarket butchers and ended up buying 3 pieces of oxtail for five pounds. Oxtail is supposed to one of the cheaper cuts of meat...my 'little' purchase has now become a household joke. Harry Potter fans may recognise these 'Hogwart' boars from the films... 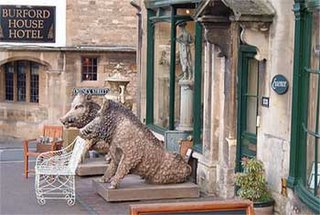 A good peer at the small ads in any town shop will give a fascinating insight into the undertows of the real life. Here is a prime example...

'Burford Life - 2005 - issue No.6 I wish to make it clear that the second of the two poems printed on page 23 of the above publication under the heading 'Rosie's Poem' (formerly, and more accurately, 'Rosies' Choice) was certainly not submitted by me. In fact I had not seen it before it appeared in print. It is not surprising that the author - or authoress - prefers to remain anonymous. I shall not be contributing again to this publication.'
Yet even as I gently mock the quaint, chocolate box-ness of Burford, and poke fun at its time locked inhabitants, I only have to raise my eyes to the real citizens of this ancient town. 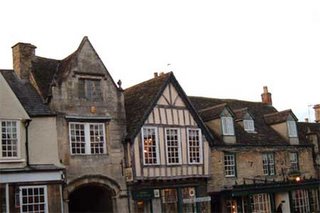 What sights have their eyes seen...a jumbled hotch potch of architectural fashions, they nestle together comfortably, unashamed of their scars, dense with history. We will soon be gone, while they - they remain. Through centuries of war, fire and famine. Warped and scorched as some are... 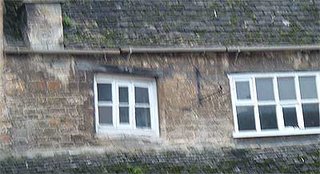 Burford looks very picturesque and expensive! I would love to visit the Cotswolds one day.

Me too! The Cotswolds are high on my list of must-visit places...

Well, my door is always open and I am always up for a shopping trip with like minded people! :)

I've stayed in Burford a few times, we had relatives who lived there, but they've passed on and their children have moved.
It's a lovely place, the church and church yard are worth a visit. Some really old graves with great tombstones etc ....
Glad you had a good day out!

Ah - Burford! I had many childhood visits to the wildlife park nearby. Burford is indeed over-touristy these days, like certain other cotswold towns and villages nearer to where I grew up - Broadway, Stow-on-the-Wold, Chipping Camden... But there are real people living among the retired rich and weekend stockbrokers, including some of the pub landlords, bookshop owners (there's a GREAT secondhand bookshop in Chipping Camden), and butchers. The butchers in places like Burford and Stow (one of my personal favourites is there) may be expensive, but the quality of the meat, often almost all locally raised, is light-years beyond what the supermarkets sell...

I really have to get back to the Cotswolds soon :)

It looks like the pics are from another century...it really has a lot of character!
Very lovely PG!

Ed, I agree with you entirely about the supermarket/butcher thing - although Andy noticed that (while all pork was local) the beef was proudly displayed at 100% Scottish...however, Aberdeen Angus is always acceptable! (Sometimes I don't know HOW we survive ;)

We will have to seek out the bookshop in Chipping Camden - not sure if we've been there yet.

Just discovered you and wanted to say hi. I'll be back soon to read more when I have more time. I adore the fishes image in this post!