First there was the tax return, lurking around like a worthy but irritating aquaintance ("you really should have done me in September, then you woudn't be worrying now"...).

Then there was the complete overhaul and tidying of my studio. Remember those little flat puzzles with one piece missing and you have to shove the other bits around to make a picture? Imagine...the smallest room crammed high with books, boxes, toys, my '78 record collection, mostly untouched in three years. We decided to explore the boxes. That's when it started. Ten year old letters from people I'd forgotten existed. Ancient gig posters, a carnival of ephemera collected in dizzy student days when every printed scrap was a new adventure. Photographs of younger, thinner us's. Petrified art materials and unidentifiable Things. It all got too much and we hastily crammed the whole bejabers under the table again.
It seemed the right time for a major spring clean. 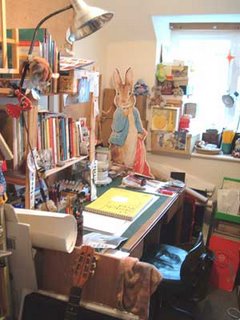 Andy has re-ignited his on-off affair with Design. The happy couple are having frequent torrid sessions in Photoshop and spawning marvellous multi-coloured collages, to be found here. He also has a new bureau, a pale oak beauty found languishing in a dusty second hand shop. Thus ensued another day of rearranging the bedroom, which I had though impossible as all space is utilised to the utmost. We managed. But that really has to be it, until we get our five bedroomed farmhouse... 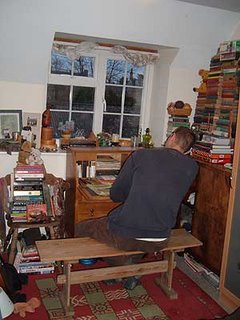 And the rest....well, before Christmas I rashly promised someone another nursery commission, which in retrospect was unwise as I am supposed to be mid-way through two books. A five day rush job on the painting put me way behind with the commercial work, but I only have myself to blame. So - much catching up and apologies to Art Directors, who are very understanding. There is much to be said for a steady routine. I mean to get one, one day.
Posted by Gretel at 17:09

I wondered where you've been, you busy bee you ;-)

I like the new desk and love all the bits and bobs you have squirrelled away, my sort of place.

Andy's designs are brilliant. What is he going to do with them?

I've got things squirrelled away I don't even know about! (Until I sometimes find them...)

I have just asked Him Downstairs what he's going to do with his collages, and 'nothing' was the answer. It is of course, the wrong answer; he is going to have his own website next. And we'll see if we can't get him some proper work.

Me...very rustily and infrequently. Which I mean to do something about...

Wow - what an exciting work space :)
but please get Andy a cushion to sit on or he'll get a numb bum

He says it makes him feel more like workmanlike...
I say he's quite well padded down there, so he doesn't need a cushion!

You have a very inviting work space. Thanks for sharing pictures!

Thanks for sharing, good to see a post from you again .. ;)

hi Gretel :)
heres an idea for all the stuff you have and didn't remember you had or is not of any immediate use to you: make your own shop! A box or something you can neatly put the stuff in ...you can even name it if you want...when you feel in need of something new (and can't go shopping) you can open it and take something out...
Sorry if this sounds silly...(it worked for me)

ah, routines-shmootines. you sound like you're the good kind of busy! i love all those stacks of books, so cozy.

Nice idea Maya, but a lot of it is in boxes already - I'm looking forward to the day I can unearth them and see what I stashed away...I think.

"studio envy" that's all I have to say. One day I will have an inviting place to work, free of lego blocks and soothers...